A Seasonal Mythic Tale: Why Scorpio & Orion Are Opposite Each Other in the Sky 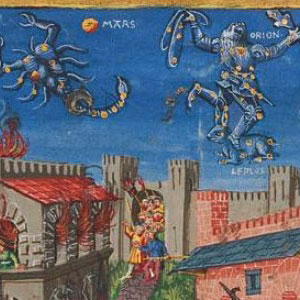 This is one of my favorite myths – perfect for this season since the Sun has just left Scorpio for the year and Orion now climbs higher and higher in the night sky, his sword and shield Orionleading the way.

It’s no accident that one constellation is always coming when the other is going, as this story explains:

Orion was a mortal, a mighty hunter and warrior with no equal among his fellow humans. He was devastatingly handsome, unmatched in strength, and had an ego to match. He also had an eye for women – well let’s not stop there. He used all his body parts in his pursuit of them. But he made two mistakes.

Orion’s second mistake was to boast that he could defeat any mortal or any god in battle. The gods found this challenge on top of the “Pleiades affair” to be just too much gall coming from one mortal. They decided to put him in his place. There is a lack of consensus in myth versions as to which god ordered Orion’s comeuppance but all stories agree on the means. The gods wanted Orion both dead and humiliated so they called on the lowly scorpion to launch its strike from its hidden burrow as scorpions do, fatally stinging Orion on the ankle.

Magnanimous now that Orion was dead, the gods decreed that this larger than life warrior deserved a place of honor among the stars. He was also placed next to Taurus but with the Bull between him and the Pleiades—just in case. The scorpion was honored with his place in the stars exactly opposite Orion in the heavens – and no doubt as an eternal reminder for Orion of the little guy who brought him down.

From their final resting places they engage in a fascinating annual ballet in the heavens.

The two are never seen fully in the sky at the same time–nor can they fully see each other. As Orion rises in the east Scorpio scurries below the western horizon as if running from the warrior he killed who now seeks revenge. However, every six months the roles of pursued and pursuer reverse. As Scorpio takes his turn climbing up the eastern sky Orion disappears under the western horizon as if running to hide from his killer.

From an astrological perspective I find the myth of Orion and the scorpion an archetypal description of how we first experience the opposition aspect. The two initially don’t know each other, aren’t aware of each other, but they are destined to consciously interact — brought together by forces seemingly outside of themselves – so that one brings a dramatic change to the other.

I see General George Patton as a story of a modern day Orion. He was brilliant, every inch a warrior – also inflated and boastful, becoming insufferable to his superiors. His slapping the soldier with battle fatigue and the resulting sidelining of his participation in the war for a long humiliating period was no doubt the sting of the scorpion brought by the gods he believed so strongly in as punishment for his hubris. He was reminded of who he was and who was truly in charge. However, as happens with the opposition, we become aware, we learn, and in the process become more who we are to become. Patton eventually became one of the great heroes of World War II.