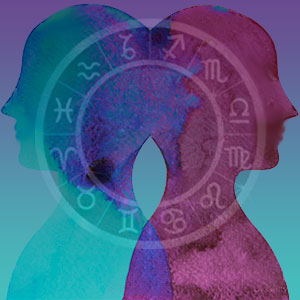 Astrological archetypes are alive. This post is a reminder of how dynamic they are. They’re always on display and performing but we just don’t recognize them as such because they often hide under verbiage describing them that can be dry as dirt.

But when they spring out from behind words on a page they’re something to behold. It’s like seeing actors perform on stage a script you’ve only read.

Following is a story of how I got a little more than I bargained for when I assigned astrological archetypes to people, regardless of their astrological sign, for purposes of team building in a group. Here’s what happened.

For several years I was in charge of “entertainment night” at an annual retreat for West Coast members of a Qabalistic western mystery school, most of whom are pretty clueless about astrology. It was a game in which the audience needed to be divided into four teams. Since the venue was an auditorium with fixed seating, it would be cumbersome to do a count-off process for team creation. Also because people came from different parts of the country this was the first time many participants had met. So something needed to be done to bring them into closer relationship with each other. I assigned arbitrary boundaries to create four quadrants. Those seated within each quadrant were declared a team and assigned to one of the four astrological cardinal signs: Aries, Cancer, Libra and Capricorn.

We took a few minutes to create bonding among team members—I hoped. I was at this point performing without a net and decided to have each group, one group at a time, chant, in increasing volume, their newly bestowed sign: I AM ARIES, I AM CANCER, I AM LIBRA, I AM CAPRICORN. It got the juices flowing among team members I was pleased to see, and also primed the pump of some competitive spirit.

Then each team had to choose a captain whose function was to spring to his/her feet to answer a question for the group once the group was sure they had the answer. This process was worth the price of admission, had there been one. Remember that these folks were not the signs assigned to them. Maybe one or two were, but that was accidental. The imposed archetypes clearly began taking over.

In the Aries camp the leadership selection was done rapidly, noisily, forcefully and was pretty much self-declared by the ultimate victor. The Libras had a protracted, energetic dialogue which I had to limit, and keep limiting, finally producing a captain. No one in the Cancer camp wanted the position and finally by default someone was selected. Down in the Capricorn goat pen, people were actively campaigning for the job, listing their credentials for the position. Finally, someone was chosen.

We then explained the rules of the game, such as they were. The only rule anyone needed to remember was that you had to wait until the end of the question before you could answer, just like Jeopardy! We introduced the three judges, explaining that their rulings were final and that’s the way it was. Then the game began.

Libra and Cancer immediately took the lead since both teams’ members appeared to work smoothly together, supporting their captains who leaped to their feet before either really had the answer, but their group members rapidly and smoothly fed them the answers so no fouls were called.

Aries didn’t get any answers right, so it didn’t take long for them to soon lose interest and drop out altogether. The rams were clearly short on team work. One was actually knitting or crocheting, I’m not sure which. Two got up and left altogether, the only ones to do so, one read a book, and the others—well, I don’t know what they were doing but it wasn’t about the game.

After Cancer took the lead, Capricorn temporarily dropped out, in the throes of dethroning their leader and huddled to select another. Capricorn and Aries never caught up. Well, Aries didn’t even try. They’d totally lost interest.

Then Libra’s leader jumped up halfway through a question. It was painfully apparent that he didn’t know the answer, and was making obvious hand motions to team mates—who unfortunately didn’t know the answer either—to help him out. The judges, who at this point were slightly inflated with their newfound omnipotence and a few cocktails before the event, declared Libra in violation and fined them several points. Spontaneously, everyone in the Libra section began chanting in unison, “Unfair, unfair, unfair.” Cancer then joined in their support of Libra. Capricorn didn’t react, absorbed in yet another crisis of leadership. As for Aries—well, they couldn’t have have cared less, involved in private discussions among themselves or other single activities.

As one of the proctors I had to remind the Libras that they weren’t really Libras (they looked kind of shocked, like “oh, yeah this is a role we’re playing”), that the judges’ rules were final and this was a game.

When all the points were added up, Cancer won. Then everyone went to the party that always follows the entertainment, and the topic at the top of everyone’s conversation list was the amazing power of the archetypes to find expression, even when borrowed for an hour for a silly game.

I’d love to hear your comments.