The Amazing Discovery My Stargazing Dogs Showed Me 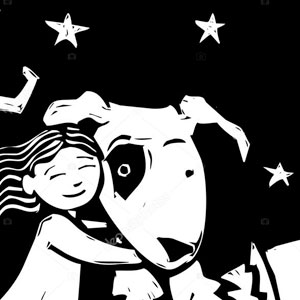 I’ve learned that discovery rarely involves finding something you’re actually looking for. It’s more like suddenly seeing something that’s been there all along, as I came to understand one star-filled night courtesy of my dogs.

I’ve also learned that just because you’ve been shown something new doesn’t mean you have a clue what to do with it. It took a subsequent discovery a few years later—yes, that was years—to understand its meaning for me. Both of these revelations contributed hugely to the foundation for my new dog astrology book, Canis Astrologicus, now in the “chute.”

I grew up with great fascination for the stars and, thankfully, the opportunity to learn much about them: clear skies for viewing, a father who knew the constellations with the myths behind them, and three generations of women above me on my mother’s side with strong but quiet tendencies to the medial arts connecting the seen and unseen worlds. As the recipient of the talents of these women, I find their tendencies I’ve inherited aren’t so quiet in me. In fact, as my life progresses they press for louder expression.

Growing up there were many nights far from city lights during which the entire starscape was visible from horizon to horizon, like thousands of diamonds glittering on a jeweler’s enormous spread of dark velvet. The stars’ pulsing vibrations were palpable, calling to me, flooding me with a fullness I couldn’t then explain, that the poet in me still struggles to express. Meanwhile, the astrologer in me slowly gains ground as interpreter.

Lounging under the Southern California night sky, our dogs (those who are part of our pack at the time) stick close by as dogs do. While I look up at the night sky they focus, as I’ve observed over the years, on things earth-bound: me, my husband, and chasing down intruders—rodents, raccoons, possums.

Until one particular night.

Discovery # 1: On that night I’d been busy since dinner finishing a column due the next morning. It was long after dark before I realized I hadn’t heard our two highly energetic Australian Cattle Dogs in some time. They had a pet door to the back yard and could come and go as they pleased, although they rarely did that quietly.

Where were they and what were they doing I wondered? Looking through the window in the back door I saw them side by side on the patio, crouched in identical sphinx-like poses, hind legs tucked neatly under them, front legs stretched out in front with paws at the edge of the pool. Their most striking aspect was that both their heads were held in postures of about 45 degrees looking up. They were so still they could have been mistaken for ancient stone carvings.

This was new. I’d never seen them like this and sensed I should leave them alone.

I checked again a while later; they still hadn’t moved. What was holding their attention? I followed their line of sight upwards. The night was clear; the stars were remarkably visible considering we lived fairly close to San Diego’s ambient light to the south of us.

I thought, well, I’ll join them. I like to look at stars, too, so I made my way as stealthily as possible to a patio chair.

Not a good move I discovered. After I settled into a chair both dogs turned their heads to stare at me with looks I’d never seen directed at me. It was hard to describe—intense, and while not openly hostile was definitely not welcoming. Their message was clear: “You’re trespassing.”

I had crossed a sacred boundary into territory I hadn’t know existed until that moment. There we were, locked eyeball to eyeball and no one blinked. I was stunned. I looked away first at which point they got up, turned around, pointedly ignoring my presence, and walked into the house.

I sat there for many minutes puzzling over what had just happened. Who were these dogs and what had they done with my dogs? Finally, I went back in the house where they happily ran into the kitchen to greet me. It was treat time. Then they followed me around the house as usual.

It was if the whole scene outside hadn’t happened—except it had. I haven’t seen “those” dogs since but I look forward to when I do again.

Discovery #2: Starting to put it together.

My second discovery I didn’t find in the stars but in the dictionary, Merriam Webster’s Collegiate Dictionary, Tenth Edition, while hot on the etymological trail of the word Star flow“influence.”

In a brief recap here is Webster’s first definition of “influence” and it’s a stunner:

“An ethereal fluid held to flow from the stars and to affect the actions of humans.”

Until I started integrating my two discoveries described in this post, I had thought that conscious connections with the flow that comes from the stars was, as the definition states, specific to human consciousness. Not anymore.

What I believe was shown to me that night was confirmation that dogs and other instinctive creatures consciously connect with their particular flow of “influence.” One thing I already know: Astrology is one of those bridges. Now I’m on the trail of identifying other areas in which those flows may be bridged. I’ll be writing more on this in the coming months.

I’d love to hear your comments.