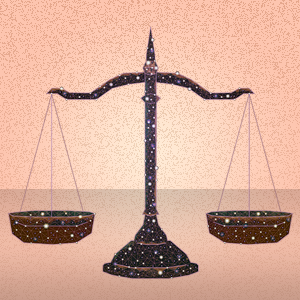 To pick up from Part I , why should the USA, this “land of the free” and “government of the people by the people for the people” have such a tumultuous history of struggle to achieve civil liberties and social justice for all its citizens?

Particularly, why should this struggle have to be conducted by its citizens against their government to stop its resistance to and obstruction of such liberties?

Oh, lots of reasons and remember–Libra requires LOTS of discussion. For starters, while our constitution had a bill of rights it was missing some key pieces:

There were no protections from being owned by other human beings. That didn’t come until nearly 90 years later, resulting from the Emancipation Proclamation.

There was no right for every person to be able to vote for his or her government representatives. Roughly 60% of Americans–women and slaves–were denied this right. Male freed slaves eventually got the right to vote after the Civil War, but women didn’t get their voting rights until 1918.

The notion that our government is of the people by the people etc. wasn’t even articulated until Lincoln used the phrase during the Civil War. In fact, those who read the history of our country carefully—oh, how I wish more people would—discover that many of our founding fathers didn’t really trust “the people.”

Remember that our nation was born with Pluto in Capricorn, a patriarchal placement. (See blog post Feb 4, 2011 this site) Even though our founding fathers were brilliant visionaries they were still white European males whose heritage was to conquer and colonize other people and their lands. Unfortunately it came naturally to them to not provide equal rights for those who traditionally served and did the work for the colonizers. Still, they did remarkably well, providing the framework for many creative and beneficial outcomes.

The new American government toddled forward. Predictably there were a few problems such as the sitting American Vice President, Aaron Burr, mortally wounding the former Secretary of the Treasury, Alexander Hamilton, in a duel. Then later, President Jefferson, who hated his by this time former Vice President Burr, issued an arrest warrant against him for treason, but it was never actually put into effect. Boys will be boys.

Back to our astrological analysis. The fundamental integrity of any planetary placement meets its initial test when that planet makes its first square to its natal position. Newbie astrology cadets, don’t panic! Cross this bridge with me now. Squares mean conflicts you can’t ignore and they will have to be resolved. Squares are necessary for development and maturation. The signs and planets involved show the nature of the conflict.

When Pluto, Lord of the Underworld, moved into Aries (sign of the individual) in 1823 squaring (in conflict with) the authoritarian structure of our nation’s Pluto in Capricorn, any astrologer would predict a cultural eruption over individual rights. Furthermore, the conflict would deal with the unfinished business of that government authority. And, of course, that’s just what happened.

The time period in which Pluto was in Aries was called the First Reform Period. That was when the drive for the abolition of slavery started to gain ground resulting in events leading up to the Civil War. Toward the end of the Pluto in Aries period in 1852 Susan B. Anthony and Elizabeth Cady Stanton birthed the first formations of the women’s rights movements. This would gain speed and bring about real change at the next major Pluto aspect when Pluto was in Cancer (sign of women and children) when women finally got the right to vote. (See Post Feb. 16, 2011, this site)

Fast forward to Pluto in Libra. Remember, the Libra archetype is about bringing us into relationships, assuring that the individual’s needs and concerns (opposite sign Aries) will be addressed through listening to each voice and weighing every potential action in terms of fairness.

Pluto in Libra (!971-1983) is the first “closing” square to our nation’s Pluto in Capricorn, which means that whatever hadn’t been addressed before about the relationship of government authority to individual freedoms and social justice would now become painfully evident and loudly protested as with Pluto in Aries. Pluto in Libra demands this be at a public level, requiring the voices of the masses impacted by such inequities speak and be heard. They did. There were many protests in the 70s.

Civil rights laws had just been enacted and those supposed to be protected by them now insisted that they be enforced—imagine that! Significant case law was made by a progressive Supreme Court eager to hear and rule on challenges to the status quo.

However, the largest impact of Pluto in Libra was on women’s rights. I remember the early 70s. It took a blitz of lawsuits for a woman to get her name, not her husband’s, on a credit card and for her income to be considered in the purchase of a home.

Women made enormous strides during that time. In the work place they got out from behind typewriters (remember those?) and started “hard-balling it with the big boys,” as then California Assemblywoman Maxine Waters said. Divorce became epidemic as women en masse left marriages not meeting their needs.

The proposed equal rights amendment (ERA) had its total life span completely within the Pluto in Libra period. Born in the US Congress in 1972 the ERA died in Oklahoma, killed by a handful of that state’s male legislators in 1982. There is still political debate today as to whether an equal rights amendment is necessary for the continued progress of women’s rights in this country.

The most revolutionary and contentious change of this period was the Supreme Court decision of Roe v. Wade which for the first time gave women the legal right to choose whether or not to have a child.

This was typical Pluto in Libra stuff, that the laws of the land entitled an individual (Aries) woman to the legal right (Libra) to decide what happened to her body.

Today Pluto has made its first return to its home position in Capricorn in our nation’s horoscope so this issue not only is still hot but will be getting hotter as it nears its USA chart return point at 27 Capricorn beginning Feb. 2022 and completing in Nov. 2023.

Key points in debate now (and still) are:

However, the fight is much bigger than that. Now that Pluto is back in its home place in Capricorn the core issue currently is what will the outcome be of the battle between Capricorn ruled governmental and corporate interests currently fighting for supremacy over individual rights and freedoms with those individuals beginning to fight back hard.

This will be the essence of political debate and action for the coming years.