A Very Pluto Christmas Card from the Underground 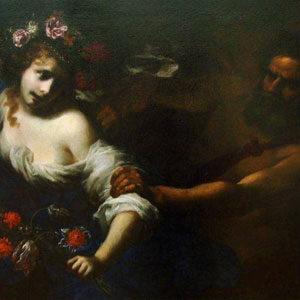 Many of you probably noticed it was harder this year to wrap yourself in tinsel and hold holly in your heart, and for some even harder to pretend to. I’ll say later in this post just who those people probably are.

Some, like me, found this Christmas hellishly difficult, more like Maundy Thursday than Christmas. There are astrological reasons for that. On Christmas Eve we had Moon conjunct Pluto, and in Capricorn no less. Let me explain:

Capricorn is not among the astrological signs that springs to mind about cavorting in holiday cheer. It is a deeply intense sign whose natives harbor passionate feelings but they must be mined through their crusty exteriors to have them fully expressed.

The Moon, regardless of the sign she’s in, always pulls us backward in time through memory. In Capricorn the memories often are not of warm and glowy times but more about the lessons, restrictions and imbalances of authority our lives are filled with. With this conjunction impacting both ends of the parental axis—one end in Capricorn (father) and the Moon ruling the opposite end, Cancer (mother)—the focus of the emotional content and deep patterns will be on family.

While the Moon pulls us backward, Pluto pulls us under. There in the underground where Pluto rules, combined with the energies of the Moon, we are forced to confront feelings or situations from the past that are buried but not yet dead. We are initially surprised by this because we felt they were all nicely wrapped in their shrouds and sealed in their tombs. But they aren’t. They are painful to confront because, as science tells us, it is dying tissues that are excruciatingly painful, not those already dead.

Whatever images or memories come up for us at this time show us where we must do our deepest work to reveal our emerging new lives we often don’t believe are possible–but they are. The Moon will be conjunct Pluto in Capricorn once a month until Pluto moves to another sign, but this placement is particularly difficult to experience on Christmas when our expectations for being wreathed by the love of family and filled with hope are at their highest.

With Pluto it always takes time and Pluto has lots of time. He has been in early degrees of Capricorn since 2008, the sign he will be in until he finally enters Aquarius in 2024. He spends up to two years aspecting just one point in the chart because he moves so slowly, goes forward and then retrogrades, generally making three passes over a point in the chart and sometimes four.

I’ve blogged a lot this year about Pluto in Capricorn, also in other signs, and his key role in power dynamics at national and even global levels. But when he pairs with the Moon, as he has this Christmas, he becomes deeply and intensely personal. For many of us hit by this Moon/Pluto aspect we become like Persephone, initially trapped helpless and mute in the nether regions with no contact with those above the surface.

If you have key planets in early degrees of any cardinal sign (Aries, Cancer, Libra or Capricorn) you probably know what I’m talking about. The first time Pluto hits that point or points you feel like you’ve been run down in the street but aren’t dead, just lying there hurting. Just when you think you can get up and start to move you get hit again, and again.

There are three parts to the Persephone myth and we need to pay particular attention to all three, which we don’t. We’re familiar with the first part where Persephone is picking flowers and the second part where the earth opens up and Pluto in his chariot carries her off to Hades where only he rules supreme and negotiations begin for her release–negotiations she has no part in even though they are about her future.

However, we tend to ignore the third and most critical part in which she becomes Queen of the Underworld, Pluto’s ruling partner. She does this voluntarily. Queens don’t co-rule as captives. This means she underwent deep changes that caused her to consciously choose to remain with him.

Those who have lived in the underground know about both life and death which we all need to do to face fear. Those who live only above ground do not. We never go to the underground voluntarily, but we do go. It is where we all have to eventually learn. Pluto takes us there and Persephone show us the process.

You can’t just go back to aimlessly picking flowers when you’ve come back from the dead. These three parts of the myth also coincide with how we experience three transiting Pluto hits over a two year period each time it hits a single point in our charts.

I have a strongly Pluto dominated chart and have had every bit of the “difficult” life that accompanies such a heavy Pluto emphasis. I’d also like to stress that I’ve had many rich rewards too, paid largely in coinage redeemable only in consciousness.

Recently I was filled with Pluto Pride thinking there wasn’t much more Pluto could do to me–I was about to find out. I was actually surprised when he moved in for the kill (we’re always surprised when this happens–even we astrologers) in early 2011.

This holiday season is the fulcrum of his two years of seesawing back and forth across that sixth degree of Capricorn to square my Aries Sun and fill in my cardinal T-square. Several aspects of my life that I thought were resolved now lay bleeding in the street and I have to tend to them. And I will. And I’m beginning to see the vision of what lies beyond the carnage around me. But right now I want to sit on the curb and cry and I want to be left alone to do so.

Even though my family situation has not changed in several years—my parents and all of their generation are still dead as are most in my generation—this holiday season my heart ached so deeply for family that I couldn’t conceal it, nor did I even try. The only relative left with whom I have a relationship is my brother who several years ago had a stroke that seriously limited his capacities for speech that have not improved and are not expected to.

He now has to think of every single thing he says which is exhausting to do, so he chooses to speak very little. I miss him terribly and my parents. This year I feel their loss in depths I have not felt before nor wanted to because it is all tied up with things long buried but not yet dead and Pluto is showing me it is now their time to end their half lives so they can die and have a proper burial.

My husband and I shared Christmas with members of his family who weren’t faring much better. He and his sister spent their first Christmas without their mother who died four months ago. His father (his parents divorced years ago) spent part of the day with us but suffers from dementia and extreme frailty so he slept most of the time and asked to be taken back home to his caretakers before dessert. His wife couldn’t be there because she has been out of state for the past three months with her dying son and will remain with him until he passes. So they’re having a Pluto time too.

The friends I spent the most time with over this holiday are those who, too, are spending time in the underground or have just come out. The Native Americans of the American Southwest refer to it as the kiva, and it is a holy place underground used for rituals. When we come out of the kiva we are changed. I’m not out of it yet but I can see the ladder up and out into the light. Next Christmas I’ll be there.

Next post I’ll be on a lighter subject (sort of) rescuing Venus from cultural and astrological “arm candy” as promised before my “descent.”