Virgo: The Yellow Brick Road Wasn’t Built In A Day 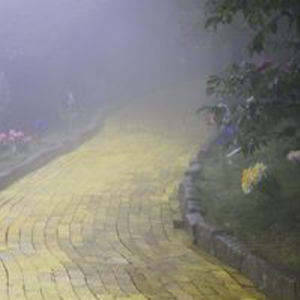 Many people describe Virgos as picky. Is it accurate? Only as a jumping off point. We get closer to the truth by elevating picky to particular (derived from particle) which of course means a small part of something—Virgo stuff. However, much as it may initially appear otherwise, Virgo isn’t as interested in just one particle as it is in how a whole bunch of them relate to each other to form something—kind of like the Borg on Star Trek—and, of course, to achieve perfection.

Virgo’s need for perfection comes from its innate and often unconscious recognition of its opposing sign, Pisces, which is the Whole from which we emerge and to which we long to return. It’s Virgo’s process to assemble the pieces and construct the path home, not being entirely clear a lot of the time where that is but persisting anyway. You’ve got to give them credit for that, and I do, since the path to do so is often lost in the mists (Pisces) or leaves people thrashing around in tall grass counting the blades (Virgo).

I’m not just talking about those born under the sign of Virgo but of the archetypal Virgo function. Everything would fall apart if this wasn’t performed in our lives. So best to examine our own charts to see where Virgo falls (as well as our 6th house, Virgo’s natural home) instead of wanting to pummel our August/September born friends and colleagues with small metal office supplies when they get into minutia. Chances are we could benefit from some closer examination of where we could pay more attention and organize details.

The yellow brick road wasn’t built in a day. We spend a lot of time wandering through fields and forests in Munchkin Land before arriving at the glorious Emerald City.

Many think Libra is the sign of art and the artist but I think it’s actually Virgo. To identify and organize those bazillions of pieces of no immediately discernible worth or relationship to others and to methodically create such beauty from exactness is the high purpose of Virgo.

Immediately following Virgo in the zodiac, Libra is the great appreciator of art and in that likes—no, LOVES—to share with others what they find most wonderful, to see that reflected around them. So Libra is more inclined to admire art hung on their walls or stand it in entry ways or gardens rather than create it.

If you’ve experienced design, art or architecture that touches you deeply, then you have experienced an end result of a Virgo creative process.

Virgo has always been the sign of service and servants, regardless of century or millennium. It immediately follows the royal sign of Leo in the zodiac. Members of royal houses did not do much of anything for themselves, such as the daily functions of household upkeep, food preparation, and especially NOT work done with their hands. That was servants’ work. As a result, generally not recognized throughout history, the most beautiful works of all cultures—art, jewelry, architecture and other creative expressions—were not fashioned by the ruling classes but by those who served them: the Virgo expression.

Over the centuries such works are considered to be of incalculable value. Not only are they the targets of treasure hunters, but are studied by historians and anthropologists who use these many pieces to construct pictures and records of the paths humanity has taken to the present. Without these works many human cultures would have very little documentation, if any, to trace details of their histories, how far they’ve traveled and what their struggles and triumphs were.

Throughout history servants, service, and the sign of Virgo have been undervalued, unfairly I’d like to add. It is doubtful that those creating these works received much, if any, compensation other than a sense of honoring the muse which inspired them. Nor did they receive credit for the majority of their work. I didn’t begin to understand this until I started my studies of the Qabalah many years ago.

Virgo the hand of God at work in the world

It was in those studies I learned that undervaluing the service function of Virgo stems from a narrow human interpretation of the role of work, who performs it and for what purpose—specifically work done by human hands.

In Qabalah the sign of Virgo is associated with the Hebrew letter yod. It is shaped like a flame and is the foundation for every letter in the Hebrew alphabet which in esoteric circles is called the flame alphabet. Another fascinating aspect about the Hebrew alphabet is that each letter is also a word. Yod means “hand.”

One of the tenets of Qabalah is that spirit is embodied in the flesh, which is at odds with some of the Christian sects that believe spirit and flesh are in an eternal battle, one which spirit is generally doomed to lose which, frankly, is a belief I have never been able to embrace.

So the notion of “hand” takes on greater significance. Virgo represents the hand of God at work—at work through human hands in the world. Hands are what we use to create, to write, to touch, to connect, to plant, to harvest, to lay on the sick to heal them, and to craft extraordinarily beautiful artifacts.

Virgo work, no matter how humble or elevated, serves the one master/creator by serving all of us.

Something to think about! I’d love to know your comments.