Mercury & Venus, Part I: Sometimes It Takes a Story 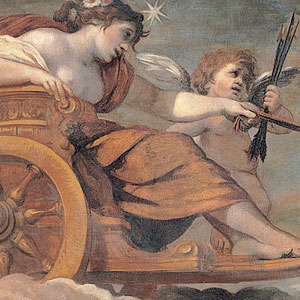 Astrologers may not tell their clients the ancient stories of the gods the planets and stars are named for, but it’s important that they’ve grappled with what those stories mean so they can transmit the deep truths astrology carries.

Any effective lecturer, writer or salesperson will tell you it isn’t enough to talk about facts and concepts. It’s when they can wrap them up in a story that they most effectively get their points across. That’s because well-crafted stories are filled with images that convey how facts and concepts work.

There is scientific reasoning for this. Our brains are hardwired to take in information most readily when it’s clothed in images and rhythmic sounds. That’s why we remember the words to songs much more easily than prose.

One of the ways we come to understand the powerful and mysterious energies operating in our universe is through stories of how they are anthropomorphized through gods and other mythical beings. I think this is the main reason the stories of the ancient gods remain with us regardless of what opposes them in culture. Though many have tried through the centuries to kill both the gods and astrology, neither will die—perhaps because the life energies they represent are eternal.

These ancient gods have ridden with us all the way into the 21st century in their chariots and more modern vehicles. Psychologists remind us that the stories of the gods are pretty accurate pictures of the different expressions of the human psyche and that they also represent the archetypes of the collective unconscious.

So here are a couple of stories that begin to demonstrate the unique relationship of Mercury and Venus. What is particularly significant is that Mercury showed little to no sexual interest in anyone—except Venus. How this impacts the horoscope will be explored in Part II.

So make some hot chocolate, wrap up in a “blankie,” and settle in. The story begins…

It was impossible for any god or mortal to restrain Venus once her passions were aroused. This is no doubt why the word “venereal” is derived from her name. So Jupiter, king of the gods married her off to the ugly lame god Vulcan, but it didn’t slow her down one bit.

Vulcan was becoming increasingly infuriated and humiliated by the blatant love affair of Venus with Mars, her favorite and most frequent lover. What particularly galled Vulcan was that their repeated romping together took place in his marriage bed. Since he was jeweler and smithy of the gods, he used his skills to craft an invisible net of chains so strong yet so fine that no one, including another immortal, could see it. He placed it in the bed to catch the two of them in the act. Sure enough his trap worked and snared the unsuspecting lovers.

Vulcan triumphantly summoned all the immortals to join him in witnessing the shame of these two. Only that isn’t quite how it came off. For starters, only the male deities showed up due to a rare solidarity among the feminine immortals not wanting to see Venus humiliated.

At first the “guys” laughed at invincible Mars caught in lame Vulcan’s clever trap. However, their mood soon shifted to envy. They started talking among themselves, locker room style. Apollo even asked Mercury, the least likely of the immortals to be sexually interested in anyone, if he would mind being caught in the net of chains for the chance to sleep with Venus. Mercury surprised everyone when he replied that even if there were three times as many chains, and even if all the gods were looking on he would indeed love to have that opportunity.

Side Bar: In another myth Mercury eventually gets his chance with Venus. He mapped out an elaborate and successful strategy to bed her. The point isn’t that it took strategy to get Venus in bed because clearly that wasn’t necessary. The significant point was that he desired her. The union produced a child named Hermaphrodite, a name most would recognize as a person who has genital characteristics of both genders.

Meanwhile, back at the scene of the ensnared lovers, Neptune, told Vulcan to free Venus and Mars. But Vulcan irately demanded restitution from Mars as compensation for his damaged reputation and ego. Eventually it appeared that no one really expected Mars to pay up, so Neptune said he would pay for him. Vulcan agreed and Mars got off without paying. No punishment was exacted for Venus or even considered.

The two lovers were released, each running off to a different exotic island, each completely unchastened. Initially it seems that Mars and Venus got off without paying any restitution, but the fact that Neptune paid for their release indicates that the unconscious pays the price and will come forward to demand payment somewhere down the road when least expected.

So in Part II we will explore in further detail what happens when the mercurial machinations of the conscious mind (Mercury) meet up with the desires from the unconscious mind (Venus).