Streaming Live from the Stars 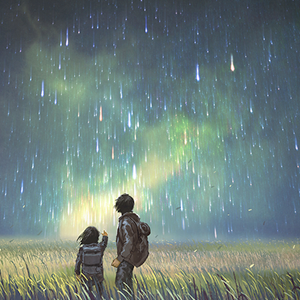 The language of the stars enables us to receive and process “influence.” To recap from my July 24 post, according to Merriam Webster’s Collegiate Dictionary 10th Edition, the first two definitions of influence are:

An ethereal fluid held to flow from the stars and to affect the actions of humans.

An emanation of occult power held to derive from the stars.

There is one word in this definition that makes some people get all nervous—“occult.” Many think it means something evil. Sigh. It doesn’t. It only means “hidden” with no pejorative meaning until the church attached one centuries ago.

I loved the beginning of The DaVinci Code film in which the main character, Professor Robert Langdon, leads a group through a process of reclaiming original meanings of symbols by peeling back centuries of cultural and historical distortion.

Human history has been more entwined with the stars than many are comfortable with today, revealed in many ways. One way is to trace the meanings of words from today’s use back to their root languages which in Western culture have a heavy emphasis on Latin and Greek.

I was an English major in college when I became fascinated by etymology, the study of word origins. Let me dispel any notion that I was a serious scholar, for I would be the first to admit that the University of Wisconsin’s social scene held far more allure for me than did its academic offerings. However, a seed was planted.

Here’s the etymology of some commonly used words we don’t consciously attach to stars and influence. “Disaster” means to go against the stars. “Consideration” means to go with the stars. To “constellate” means the stars coming together.

This language of influence is not the language of science or politics or personal relationships or even religion that we use in our day to day living. It is the language of images. Images are natural to all human beings because they are our minds’ first conceptualizations of how we experience the world. Spoken and written language is how we articulate those images and communicate them to others.

Most of us don’t consciously realize that our communication and comprehension depend on constantly translating images into words and words back into images. The more that language uses images, especially those imbedded in rhythm and rhyme, the more our minds wrap hungrily around them and the easier they lodge in memory. That’s why we remember the exact words to songs or verses more easily than we remember standard prose.

I think influence is what inspires us through the right side of the brain producing in many what is commonly called a “calling,” maybe to be an inventor or priest or teacher or physician or artist or even an astrologer.

Let me clarify what I mean by a calling. It is an inner necessity to follow a particular path which can put the person in a developmental crisis often involving sacrifice or, at the very least, inconvenience as it pushes to be acknowledged. Whatever it is it comes from beyond the physical world, from the world of inspiration, the world of dreams and possibilities, the realm of the gods and destiny–and it pushes us to become much more than we are.

Years ago, I struggled with how to express my astrological talents. I was just getting started as a published writer but my professional emphasis was primarily in the business sector with astrology more as a side line. I did not realize the depth of this struggle until I entered Jungian analysis.

At the conclusion of my first session, my analyst told me that what was most apparent to him was that I was from a lineage of the ancient spiritual traditions which now demanded far more attention and expression than I was allowing. When he said that, I felt that something deep inside me was honored in a way I’d never felt before. That was the beginning of my shift to a professional expression in which writing and astrology are now moving closer to center stage.

I drove home from that session totally under the influence, but not the kind I could be prosecuted for. My mind was swimming with images of an ancient wood at night, of many hills, of cold stone walls that cloistered the heart, and of stars flashing all around me. That night I wrote my all time favorite poem of my creation. Here it is. Use it if you want, just give me credit.

It tugged at her, that ancient call,
so she slipped from her barren bed
where her sisters in black were asleep,
to that magical night to catch stars soon to fall.

She ran through the trees to the open space,
she flew over crests of the hills;
with joy she embraced those fiery streaks,
their burning caresses, their kiss on her face.

All night long she danced with that Light
wrapped in its numinous arms;
her blood ran white and hot with its fire
that forever would kindle her soul in the night.

Her days were cold in those walls of stone,
sorting the dried and withered fruit,
sifting dead ashes scorched by the Sun
while her sisters knelt silently weeping alone.

But at night she bathed in those radiant beams;
her hands still covered with silvery dust
stroked the burning kiss on her skin,
and wild she ran with the stars in her dreams.