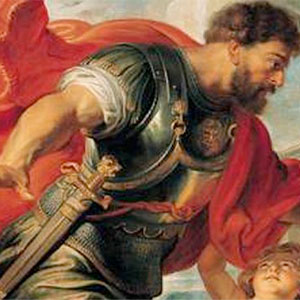 Much of the modern astrological press covering Mars focuses on him as the poster boy for bad behavior: angry, violent, cutting, sexually conquering, like the profile of a domestic violence abuser. To truly understand Mars, as with my treatment of Venus in my last post, we have to scrape off centuries of accumulated cultural layers.

Going back to his earliest mythic origins he has identities which at first seem to conflict. Most recently he was the fiery aggressive patriarchal god of war, the muscle that conquered and defended kingdoms and protected their commerce. Prior to that time in history societies were smaller more isolated agrarian settlements whose archetypes were mostly feminine. In this period Mars was the god of fertility, spring and new growth.

What links these two roles is that Mars is a creative destructor. He allows new forms to emerge by breaking down old ones. This explains how Mars could be ruler both of Aries, the conquering warrior, and Scorpio, the changer and transformer.

Much is destroyed in the carnage of war. Governments topple, cities crumble, people die. Newness always follows that could not emerge without the rapid decimation caused by war, just as in spring new life emerges from the death of winter. In agriculture seeds grow and die to release the roots, stems and leaves that produce grain and fruit. In husbandry (raising livestock to you city dwellers) when the sperm and egg join they each die producing an entirely new life form to be born.

Mars is the ultimate lover. He knows what he wants. His heat and fervor cause us to pant after and be consumed by passion—not just sexual. Like Venus his desires do not come from personality, although they may look and feel like it. His pursuits come from life’s longing to make us become more than we are, to conquer and claim what at the moment calls us. And like Venus, Mars doesn’t care if what we want belongs to someone else or doesn’t want us back.

To be in the grip of Mars is an explosion of feelings, least of which is that of being out of control. One day at work many years ago following such an experience I spent a lot of time—most of the day actually—staring out the window trying to figure out what happened and how or if I could have seen it coming. I’m being intentionally vague as to what that was. Since my Mars is in Gemini in the ninth house my main process for getting to the heart of something is to grapple with it through writing. I almost unconsciously picked up a pen and wrote the following lines:

When the craftsman joins two pieces
By thrusting them in fire,
It matters not a bit to him
If it were their desire.

That, the astrologer in me realized, is how Mars works through us.

I offer Abbie Hoffman as a modern example incorporating Mars’ entire mythic heritage. Hoffman’s leadership as a disruptive activist in both the 1968 Democratic convention and his shenanigans during the infamous Chicago Seven trial were those of the god of war violently tearing down existing structures with great passion and surgical precision. One of many casualties was the good old boys’ club of the Democratic Party, blasted and opened to women and minorities.

Following Hoffman’s life in the wake of 1968 reveals he was fully conscious of the Mars process of bringing something new into the world through the disorder he created. Eternally the disrupter, his writings are full of insight and wisdom. I think he summed up the ultimate intent of Mars in our lives in a quote from his book Soon to Be a Major Motion Picture: “Transitions should not be confused with conversions.” Mars keeps us moving especially when we aren’t aware we need to.

If it weren’t for Mars we’d remain imprisoned and passionless in the walled off confines we build for ourselves, largely unconscious we have done so. We often don’t realize their original purposes are no longer alive, that they have petrified into dogma or rigid ideology. Mars knows that and blasts us out. He is not a negotiator. He’s a one god Special Forces team.

Regardless of where Mars is in our charts, he will be our instrument for bringing something new through our psyches and into the world. In that process not everything that was there before will remain standing, nor should it. After an intense Mars experience we find ourselves at the frontier of the uncharted territory that will become the landscape of our future in some key area of our life.

In my next post I’ll highlight some key points for analyzing how these famous lovers, Mars and Venus, relate to each other in your chart. In the meantime, I’d love to hear your comments on this and other posts of mine.