Hockey - An Antidote to Road Rage 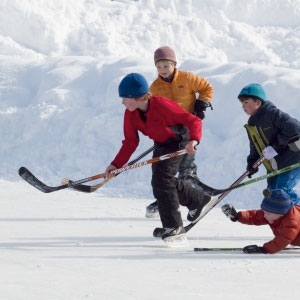 We in Southern California seem to have a disproportionate problem with road rage. What is this all about, anyway? And what’s with this veneer of politeness on the roads here? I mean, why don’t people honk their horns? It’s rather frightening the way placid faces and gleaming teeth shine at you from neighboring cars seconds before bullets come whizzing through the windshield.

Like many of us living in California, I’m not a native. My home state, Wisconsin, still doesn’t have road rage. My theory on that? Hockey! Show me a culture in which hockey proliferates and I’ll show you a milder citizenry. Instead of blasting people to smithereens on the freeways, we cheese-heads scream for blood watching hockey players knock each other senseless. It’s cathartic. The ancient Greeks were right; it’s good culture and good theater to perform on stage acts we wouldn’t dare commit against each other in daily life.

In Wisconsin, children are trained in this theater at the local skating rink. When they are sent sprawling and spinning by little Pedar barreling down the ice to pound into powder little Ulrich racing from the other direction, no one is particularly concerned.

Everyone knows Pedar and Ulrich will grow up to be hockey players. They will save us from ourselves. We understand at some level that we will commit fewer acts of violence because we flock to hockey arenas to watch players high stick each other into gross stupidity.

It’s something to behold, a hockey game. Oh, I don’t mean the California sanitized version, fans driving in 70 degree weather to climate-controlled indoor rinks with solid seating, actual floors, real walls, and flush toilets to sit in shirt sleeves and do the wave.

No, I mean a crowd primed to watch blood spill on an outdoor rink around which someone has stuck rickety stands surrounded by old pier pilings pounded randomly into the frozen ground and covered with tarps luffing in the wind chill.

A crowd that leaps to its frozen feet chanting, “Kill! Kill! Kill!” when one of its favorite players is sliced by high sticking so his forehead’s flapping over his eyes. He’s got one foot in the box and one on the rink as the 15 year old team assistant sews him up with his mother’s darning needle so he can see enough to get back in the game and knock the stuffing out of the guy that did it to him.

And spectators continue to chant, “Kill! Kill! Kill!” and throw hot pennies and rubber chickens on the ice in the paths of the opposition. That’s theater! That’s hockey!

Since we don’t have hockey here, what can we do about our road rage problem? Maybe we could start by honking our horns. Just a little.