Mercury & Jupiter: Taking the Great Leap with the King of the Gods 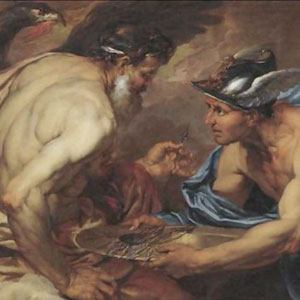 My last blog post was about the astrological implications of Mercury’s role as guide to the underworld for the newly dead. How I wished (briefly) I had been among them after promising the ambitious undertaking to describe Mercury’s pairing with other gods in subsequent blog posts.

But then I also realized that in that rash pledge I had demonstrated a key tenet of how Jupiter and Mercury (my Mercury Jupiter trine) together can lead you without critical thinking or second guessing to boldly go to a place you never planned to go and then you go. So here I go.

To recap: Mercury is our guide to those borders between the known and unknown territories of our consciousness. Sign, house and planetary aspects (the gods in action) impact our decisions about how we are to navigate those borders. We do this over and over. Depending on which god is front and center with Mercury on the journey we do this cautiously, or aggressively or sometimes we just sit frozen.

But when Jupiter is traveling with Mercury in our charts we don’t fly tourist, we don’t go first class. We do better than that. Like Lois Lane flying with Superman, we feel we are the ones flying the plane. Intoxicating stuff.

Here’s a little god history to explain how this happens.

Jupiter is King of the gods of Mt. Olympus and the head of their government. He is the great convener, calling the immortals together when there are problems to address, new issues to consider. These assemblies seldom produce immediately discernible results, but that isn’t the point and it bears remembering when dealing with Jupiter. Or more accurately when Jupiter is dealing with you.

The point is that the inadequacies of the old ways are to be acknowledged and addressed so a new concept can emerge. We call that creation. And creation is messy. Why? Because the gods are driving it through initially unconscious participants—you know, us mortals—into manifestation.

Without this partnership between the gods and us there can be no creation. However, for us mortals it often doesn’t seem like much of a partnership. The gods outrank us. We have no wiggle room for negotiation. We’re basically taken hostage and there is only one direction to go—forward. The Mercury-Venus post coming up will demonstrate this dynamic more thoroughly.

While Jupiter is the great convener, he is not the great decider. Jupiter’s method of ruling—and that is a term I apply loosely here—is that if the dynamics of the conclave get too far out of hand, as is usually the case, he uses his largeness of being and thunderous powers to keep things moving. The guidelines or intended goals of how this occurs aren’t his first priority since details take a back seat to movement, a key point to remember about Jupiter. A very key point.

Everything about Jupiter is large. He is known as the Great Benefic, overflowing with gifts of abundance and expansiveness. Just as he keeps the god’s convocations moving so does he keep us moving. And he does it with a lot more carrot than stick.

He fills us with confidence, sometimes over-confidence; whatever is necessary to get us to move.

He makes us not only want to part the curtains of rules and fear drawn around our lives so we can enter new realms, he makes us feel that everything is in place to do so. We make that risky move, take that leap of faith, and chase that big dream because it seems so right at the time. How else could we break out? Sometimes—a lot of times—it pays off. Sometimes it doesn’t, but with Jupiter we always think it will.

And if we mess it up, well that’s OK too since Jupiter’s lessons are not like Saturn’s where you find yourself shamed, flattened and bleeding from your bank account. With Jupiter those things can happen but you don’t feel so badly about it. That’s because Jupiter’s ultimate goal for us is to find increased knowledge and wisdom that only the journey can bring.

So when Jupiter is linked with Mercury in our charts natally, by transit or progression we can face a lot of those borders of our conscious and unconscious states confidently and with amazing results. After we get a little equity in the process we find we want to fly across those boundaries. Sure, we may have to come back to tidy up a few things but we got into the new territory, often bringing many others along with us. Remember, Jupiter keeps everyone moving.