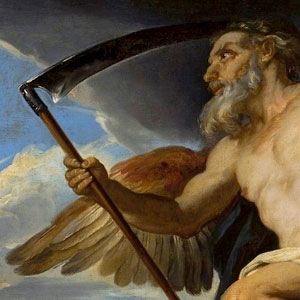 To recap from Part I: Saturn killed his father Ouranus at his mother’s request. Just before he died he prophesized that one of Saturn’s sons would likewise dethrone him. Saturn therefore ate his children immediately after their births to confound the prophecy—or so he thought.

Dodging fate rarely works—even among the gods. Saturn’s wife Rhea successfully tricked her husband and hid their youngest, Jupiter, who true to the prophecy later overthrew Saturn. But he didn’t kill him.

Jupiter then forced Saturn to regurgitate his older brothers, Neptune and Pluto. We don’t hear a lot about that part and we should because that’s where the good stuff of the whole myth is.

I’ve been chewing on this Saturn story for some time – I know, probably a bad choice of words. Most story tellers focus on his eating the kids part and don’t go further. We get hooked by horror pretty easily. But it’s only Act One of the Saturn saga, and Act One is mostly about the Saturn we fear, not the Saturn who ultimately liberates us through all the things we start out despising him for.

That’s the Saturn holding the hourglass with its relentlessly falling sand steadily measuring our inevitable and inescapable progress toward death, a death which will occur by the stroke of the sickle he carries in his other hand. This is how Saturn “eats” us, through his deteriorating effects on our mortal bodies, eventually cutting down all living things.

Initially Saturn encounters can feel like a kind of death, and they often are but they’re necessary deaths—killing off weak foundations, wrong use of authority or victim to someone else’s authority. The list goes on.

This is the Saturn whom we blame for our misfortunes before we psychologically mature and learn to look to ourselves first when something happens. That is why Saturn’s challenges appear to come from outside ourselves until we can finally understand what inside of us attracted them in the first place or how we may have unknowingly contributed to them.

No matter how hopelessly imprisoned we feel by the chains of outer conditions our first task is to take responsibility for what is occurring regardless of its perceived cause. Eventually we learn that the lessons of Saturn involve changing only ourselves. Like the stern parent he can be, he stands guard over all rules, laws, authorities, forms, discipline and enforcement until we are able to maintain them for ourselves.

Saturn is the outer-most planet we can see with the naked eye in our solar system which indicates he operates largely in our field of self-consciousness. He represents the boundaries between our personal consciousness and the unlimited visions and other gifts available from the unconscious realms to help us become who we are to become, destinies we could never achieve without first passing Saturn’s tests.

The planetary aspects that comprise each 29 year Saturn cycle give the clearest before and after picture of any planet. Thus, he makes sure we can understand and apply the rules of the road before we start driving through our beckoning, evolving and often scary universe—the universe in which we are to recognize that the role of both our authority and personality is to increasingly develop into a vehicle for expression of a higher consciousness.

That’s when the stage is turned over to Saturn’s children Neptune or Pluto—who, as you recall before Jupiter insisted they be released, had been sequestered inside him. This implies that our developing capacities are already “inside us” waiting for the next generation of ourselves to help us become more of who we are to become.

I witnessed a wonderful example of this sitting in a 12 step meeting one evening when I was first learning astrology many years ago. I hadn’t been sober all that long myself. (A present from my first Saturn return.) I heard a man tell his story of how he started down the path of the solid sobriety he’d then had for several years.

He’d become an irresponsible obnoxious selfish drunk who ignored the needs of his family and his responsibility to them. His wife initially accommodated and covered for him. Then he said he became dimly aware something was changing which he later learned was due to her new involvement in Alanon.

From that point on if he passed out on the floor she left him there. If his boss called wanting to know where he was she told him he was still drunk and passed out. Then he stumbled home late one night and not only found all of his belongings strewn across the front lawn but that the locks to the house had also been changed.

He told the group, “that’s when I was told I’d been released with love.’”

That’s also when he took responsibility and turned his life around. Since then he became an important influence in helping others achieve and maintain sobriety.

It may not seem like it while we’re still struggling with Saturn’s lessons but it sure does afterward, when we have gained wisdom and perspective. Saturn is one of the blessed instruments of grace. This quote of Anne Lamott describes it beautifully:

I do not understand
the mystery of grace –
only that it meets us where we are
but does not leave us where it found us.