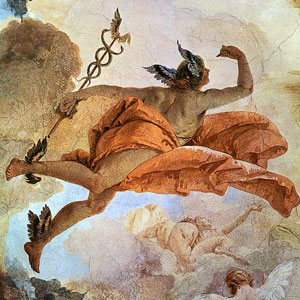 When we astrologers talk about Mercury we often neglect a key function of his in mythology—he has a lot to do with the dead.

Since Mercury just went retrograde we have an opportunity to get a closer look at him as on winged sandals he flies backward through the heavens and our lives.

In mythology Mercury’s key associations with death are:

Mercury in astrology represents the mind which is our primary navigator to our destinies including the borders that separate our known from our unknown worlds, specifically to those areas on those borders that we have to cross.

When Mercury delivers the dead to the banks of the River Styx and the ferryman Charon, he doesn’t take the boat ride to the underworld with them. His job of leading the newly departed souls to the far boundaries of the life they are leaving to cross into a new reality is completed. However, he is the only one who has a round trip ticket between the living and the dead—good at any time.

Clearly this task is more elevated than Mercury’s most commonly known role as messenger of the gods, making him much more than a cosmic courier bicycling recklessly through the traffic of the heavens and immortality.

Still, he is a messenger, but what he really carries are the secrets of deep mysteries which is why he is revered in several ancient societies as the keeper of sacred knowledge, although he is not the source of that knowledge.

This is why Mercury is also known to the ancient world as a mediator, often of some pretty high level stuff. Mediators are needed to facilitate movement out of stuck places—in other words known worlds—to move people toward a new albeit often scary-looking reality.

The astrological house, sign, and aspects of our Mercury placements set the plot lines for how our decisions and movements will navigate us there. The aspects of other planets to Mercury indicate the role of other gods in this journey.

For instance, I have Mercury conjunct Sun in Aries so exploring new frontiers is something I really like and can be remarkably fearless about pursuing. My Mercury is also trine ever-expanding fortune-bringing Jupiter in Leo which is why I am known for a certain facility for success in both communications and expansion into new territories others are more timid to approach. On the flip side I can be somewhat casual about the details but then there often aren’t a lot of maps for where I like to go.

I look on this configuration as a gift from the gods and no slight compensation for the train wreck of squares to Saturn and Uranus in my eighth house and all those Pluto aspects dragging me in and out of the underworld.

But enough about me. What about you and your Mercury?

In my next post I’ll pick it up with how Mercury works with other gods/planets in the chart. Will they be a help or hindrance? With the gods it’s usually a two edged sword. Stay tuned.