More Astrologers' Tales from the Road: A Whale's Tale 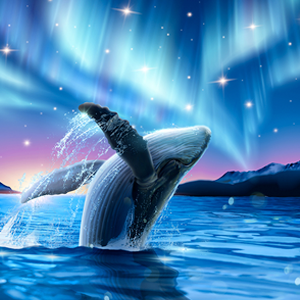 This tale is about the time the San Diego Astrological Society was an exhibitor at a local university’s Whale Day event. Already the dullest of the dull can see that this might not have been the best fit. However, our board president arranged for our participation responding to what she perceived as a call to astrological missionary work, a concept way ahead of its time I thought—and still do.

To tell this story requires a little ramping up first.

This was confirmed when a reporter who was writing a review of my book, “Humanus Astrologicus: Reasons in rhyme why we do what we do,” scheduled an interview with me at a local Starbucks. She told me after we finally connected that she was watching others who she thought “looked like astrologers.”

Bold as I can be I confess I didn’t have the nerve to ask what that was. She missed me because I was dressed in standard business attire. We finally connected when we each held up a copy of my book. If you go to my photo on the home page of this site you’ll see what I look like. You know… normal… no snakes, no fire.

As I go about my daily life I’m used to responding to the random inquiries from those who have just learned I’m an astrologer. I’m also used to those who look at me as if my spaceship just landed and I stepped out with Elvis.

I can’t say I’m used to it but I’ve certainly become experienced at dealing with those who puff up sneering, “I think astrology is nonsense. I only believe in science.” Actually I’ve come to kind of enjoy this one.

Before they can get away, I say, “Yes that’s why I love astrology. It’s so empirical. Please, tell me specifically how you applied the scientific method to come to your evidence-based conclusion—the thesis you formulated, the data you identified to collect and measure, and what evaluation techniques you used to reach your conclusion.”

Then I just stare at them and I stare pretty good. (Yes, I was an English major and know it should be “well” but “good” just seems to fit here.) I’ve never gotten more than a few stammers in return.

But I don’t think I’ll ever become acclimated to the treatment from those who think astrology is straight from the pits of hell, that astrologers are demons or at least demonically possessed, and that any exposure to astrology leads to demonic possession.

So when we’re all out and about, just as I largely pass for normal so do they. And that is fine because then we are on a level playing field. What is not fine is when I am trapped in an exhibit booth with big astrological signs all around me, and they come upon me like I’m the spawn of Satan.

So, now we get to the story. The invitation to exhibit at Whale Day was apparently widely distributed to various community groups in the county. Had I been the recipient of it I would have trashed it. But our board president found out about it and arranged for our participation.

Then shortly before the event I got a panicked call from her: “I’ve just been notified that all exhibitors have to demonstrate how their exhibits are related to whales.”

I have a mutual reception of Mercury and Mars and am rarely at a loss for ideas.

I still had a book from childhood my Dad gave me with big pictures of maps of the constellations of the heavens. I took this over to our group’s newsletter editor who is a whiz at anything to do with graphics. She quickly had a large glossy poster made featuring an enormous image of the extrapolated and much magnified constellation Cetus the whale done in a sort of underwater iridescent green.

Down one side was the caption: CETUS THE WHALE HAS HIS PLACE IN THE STARS. WOULDN’T YOU LIKE TO KNOW YOURS?

The answer from Whale Day attendees it turned out was, “no, not really.” After the exhibit area was opened to visitors I kept wondering when those from the 25 percent of the population pollsters report believe in astrology were going to show up. Few did.

Still, our sign attracted attention. It was an automatic sorter identifying those who thought astrologers were on the wrong side of the spiritual tracks. They would see the map of the constellations—I think that’s standard grade school fare—and then say, “Look children. Look at the constellations.” (Apparently, constellations in the sky aren’t yet considered evil.)

Then when these moms got up close and saw the caption they’d start flapping and cackling and shooing their kids out of the area hissing things over their shoulder I never bothered to try to decipher–acting as if we were about to snatch their very souls. I haven’t had so many eye-daggers aimed at me since the day I walked all over a conservative town sporting a T-shirt that read, “the moral majority is neither.” There’s palpable energy that goes with those looks.

We were there for five hours of this—among the longest five hours I ever spent.

As the afternoon progressed I began to look with friendlier attitude toward the exhibitor across the aisle from us who arrived that morning, seven different types of high, staring out through wild Neptunian eyes. He looked and sounded like he’d been up for a couple of days partaking of every drug known to both legitimate corporate and illegitimate entrepreneurial pharmaceutical industries. But him I understood pretty well due to my many years of 12 step experience.

That was the last time our astrological group exhibited at a venue other than an astrological conference. And I hope we keep it that way. But it’s not my last tale from the road by any means. Stay tuned.